Rebound Orthopedics & Neurosurgery, the region’s most preferred orthopedic practice and the team physicians for the Portland Trail Blazers, was proud to sponsor the inaugural Rebound & Rip $50k Challenge.

During Trail Blazers games throughout the year, every offensive and defensive rebound accumulated the challenge cash prize to $50,000. Bryan Rooney from Newberg, Oregon, was selected from nearly 1,200 entries and took on the challenge on Wednesday, April 10, at the Trail Blazers home game against the Sacramento Kings.

For the Rebound & Rip $50k Challenge, Bryan began in the restricted area on the far side of the court and proceeded to throw the ball off the backboard. He then rebounded the ball and took a shot at the opposite hoop. Although Bryan did not make the final shot for $50,000, he was awarded $500 from practice representatives Dr. Brian Ragel, Dr. Matthew McGehee, and Dr. Jim Chesnutt. 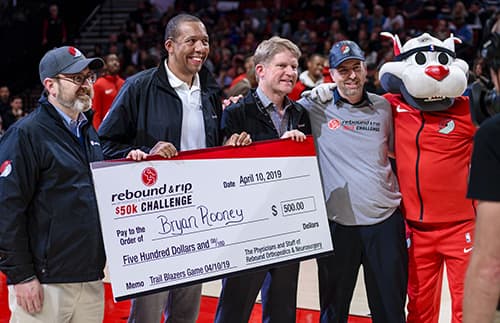 Thank you to everyone who entered the Rebound & Rip $50k Challenge. Please keep a look out for information on next year’s challenge in the upcoming months.