A 36-year-old female was brought to the emergency department by her parents for evaluation of headaches and altered mental status. The patient was found to have a Glasgow Coma Score of 11. She was drowsy, agitated and did not follow commands, but readily moved all four extremities. She was disoriented and her speech was intact. Her history was primarily obtained through her parents and medical records. All laboratory tests, including sedimentation rate and C-reactive protein were normal. CT of the head revealed multifocal lesions.

Recent history included admissions within the last month to two other local hospitals for nausea, vomiting, dehydration, as well as malaise. She was diagnosed with gastritis and discharged home on anti-emetics both times.

The patient’s past medical history was remarkable for kidney transplantation six years prior. The patient was currently on immunosuppressive therapy. Transplantation had been performed because of end stage renal failure from chronic and recurrent pyelonephritis due to vesicoureteral reflux.

Differential diagnosis included metastatic disease, brain abscesses from an atypical infection and lymphoma. CT of the chest, abdomen and pelvis ruled out metastatic disease. MRI of the brain showed multifocal lesions with vasogenic edema, mass affect and midline shift (Figures 1, 2, and 3). The neuroradiology, neurosurgery, and infectious diseases services were consulted and atypical fungal infection was the most favored diagnosis based on history and imaging studies. The patient was started on antifungal therapy. A lumbar puncture was not considered due to the significant amount of edema and concern for development of a herniation syndrome if this was done. 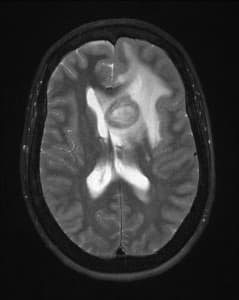 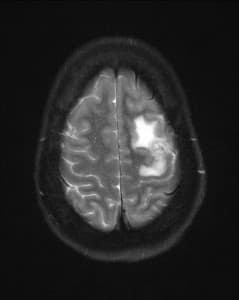 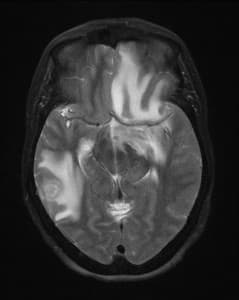 Despite treatment, the patient continued to deteriorate and due to increased lethargy, agitation, and decreased mental status, the patient was taken to the operating room for a left frontal neuronavigation guided stereotactic brain biopsy for definitive diagnosis. The frozen section from the left frontal lesion was consistent with necrotic inflammatory changes and was non-diagnostic. A decision was made at this point to proceed with an additional right temporal craniotomy to do an excisional biopsy of another lesion and provide more specimen for pathology. A dense mass was removed en bloc and sent for permanent pathology and microbiology.

Postoperatively, the patient did well with improvement in mental status. She was treated with levetiracetam for seizure prophylaxis, dexamethasone for cerebral edema, and fluconazole to cover fungal infection. During the course of her hospital stay, her mental status improved significantly and she was discharged home after one week on levetiracetam and a dexamethasone taper. Due to negative fungal cultures, fluconazole was discontinued.

The patient returned to the ED shortly after discharge with increased headaches. This was felt to be due to a too rapid dexamethasone taper and the dosage was increased again and a slower taper was started.

Pathology results were positive for post transplant lymphoproliferative disorder (PTLD), Epstein Barr Virus (EBV) positive central nervous system (CNS) diffuse large B-Cell lymphoma. The patient was referred to the oncology service for further evaluation and treatment. She was staged at diagnosis as Stage IVA. Chemotherapy and immunosuppressant medication reduction was recommended. She was treated with rituximab and temozalomide and responded very well. One of her immunosuppressant agents was discontinued and another was reduced by half.

Now, one year later, the transplanted kidney has demonstrated good tolerance and function to this regime without evidence of rejection. Additionally, the oncology service recommended reserving radiation treatment for disease progression. The patient has had no evidence of recurrence so far and is fully functional and enjoying a good quality of life with her family.

PTLD was first reported in 19691. Since that time it has been shown that lymphoproliferative disorders are a complication of immunosuppressant therapy in recipients of bone marrow and solid organ transplantation.

PTLD is the most common cause of cancer related to solid organ transplant, comprising up to 10% of all transplant patients. However, incidence in renal transplant patients is low at around 1-3%(1,2). Many PTLD arise from EBV infections, but rarely does it involve the CNS. Literature reports indicate that it can occur any time from 4 to 264 months after kidney transplantation(2). This differs from primary CNS lymphoma (PCNSL), which is not associated with EBV infections. However, both PTLD and PCNSL grow within cerebral parenchymal perivascular spaces and can cause necrosis.

In PTLD, the brain is infiltrated with large atypical lymphocytes also referred to as diffuse large B-cell lymphocytes and can be found throughout the brain. Our case had 3 such lesions. These lesions are not only found in the brain parenchyma but also in the leptomeninges(2). Due to heterogeneity of the disease, survival rates span from 25-60%. Negative prognosticators are EBV, late onset of disease after transplant, poor performance status and CNS involvement. Outcome is not as favorable with post renal transplant lymphoproliferative disorders with CNS involvement, compared with primary CNS lymphoma.

Treatment for primary CNS lymphoma is chemotherapy, usually methotrexate. Surgery is performed for diagnostic purposes only, usually via stereotactic biopsy of the lesion. Chemotherapeutic agents pose challenges in patients that have undergone renal transplantation, because of compromised renal function and also because these patients may be more susceptible to infections than the standard cancer patient. Reduction of immunosuppressant agents is recommended in PTLD to allow a response rate of 25-50%. However, this has to be carefully managed to minimize risk of allograft rejection. Radiotherapy is an option for patients who do not respond to high dose methotrexate or who cannot receive it. In our case, the oncologists recommend rituximab and temozalomide as better options since these would not be nephrotoxic and have an excellent response rate. We will also reserve whole brain radiation until there is disease progression.

Patients with EBV positive PTLD diffuse large B-Cell lymphoma with CNS involvement are rare and can be challenging to diagnose and treat. The question has been posed if PTLD lesions are truly lymphomas and whether they should be managed like other lymphomas, since they are distinguished as a complication from chronic immunosuppressive therapy. Since this condition is rare, there have been suggestions by the clinical advisory committee of the World Health Organization that a separate classification of PTLD could be helpful, because of the unique clinical and biological features with this condition(3).

For optimal outcome these patients require a multidisciplinary approach from hospitalization to outpatient follow up. This patient represents one of several patients that we routinely follow at brain tumor board conference for multidisciplinary recommendations on further care.