Papillary Tumor of the Pineal Region

A 53-year-old healthy female presented to the Emergency Room for progressively worsening headaches over the course of 3 weeks after having had a minor head injury. When her headaches became intolerable her husband brought her to the ER for further evaluation. A CT scan was obtained and showed acute obstructive hydrocephalus due to a pineal mass (Figure 1). The patient then had an MRI scan of the brain that confirmed she had a large pineal tumor (Figures 2 and 3). 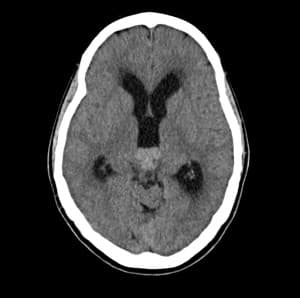 Figure 1: CT head without contrast showing a hyperdense mass in the pineal region and acute hydrocephaus 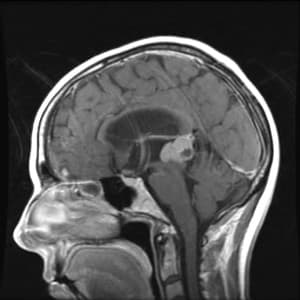 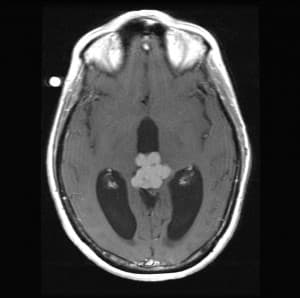 The patient was taken to surgery for an endoscopic biopsy of pineal mass and third ventriculostomy. A right frontal approach with a bur hole made slightly anterior to the coronal suture was employed. Postoperatively, an externalized ventricular drain was placed and the patient was monitored in ICU. After 2 days this was discontinued and she was transferred to the neuroscience ward where she was mobilized and seen by the rehabilitation services and eventually discharged home. The patient’s headaches resolved after the ventriculostomy due to resolution of hydrocephalus (Figure 4) and with corticosteroids. 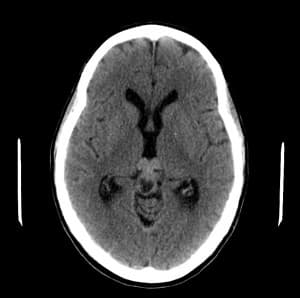 Due to the unusual nature of the biopsy material, the specimen was sent to a neuropathologist at the Mayo Clinic. It was determined that the lesion was consistent with a Grade II / III papillary tumor of the pineal region (PTPR).

The patient was readmitted to the hospital at this point for further surgery. She underwent a neuronavigation guided posterior fossa craniectomy where a supracerebellar-infratentorial approach was taken to completely excise the tumor. Intraoperatively, the tumor capsule was cauterized and then the tumor was debulked in a piecemeal fashion. Most of the tumor had a distinct capsule. Care was taken to not injure the dorsal midbrain structures (superior and inferior colliculi) and the trochlear nerve.

A postoperative MRI scan of the brain showed complete resection of the tumor without complications of stroke or hemorrhage (Figure 5 and 6). However, the patient had diplopia and an up-gaze palsy. She was treated with corticosteroids for several weeks and her vision progressively improved. Visual rehabilitation was started after discharge from the hospital. 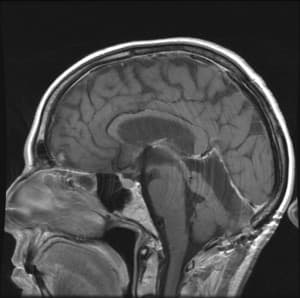 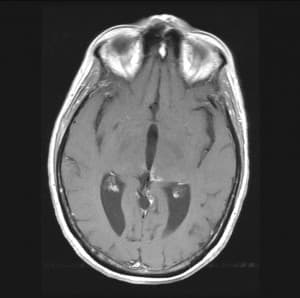 Once recovered from surgery, radiation therapy to the tumor bed was initiated. The patient experienced hair loss, fatigue, and nausea and also felt that her diplopia was worse. These side effects resolved with steroids and time. Three months after radiation therapy, there was no evidence of tumor progression. Chemotherapy has been postponed till and if the patient has a recurrence.

PTPR are unusually rare with less than 50 cases reported in the world literature to date(1). These types of tumors arise from neuroepithelial cells in the pineal region and are believed to originate from cells of the subcommissural organ. Treatment recommendations are not well established in the literature but aggressive surgical resection, radiation therapy and/or chemotherapy have all been recommended as options with surgery followed by radiation therapy being the most common approach.

Endoscopic ventriculoscopy is the initial management option whereby a ventriculostomy is done to alleviate hydrocephalus followed by a tumor biopsy. Once pathological diagnosis is confirmed, surgical resection is preferable prior to radiation therapy or chemotherapy. If endoscopy instruments are unavailable a ventriculoperitoneal shunt is inserted to treat hydrocephalus. Treatment for hydrocephalus should be done as soon as possible because the patient can deteriorate quite suddenly and could die very quickly. Ventriculostomy involves the creation of a hole between the third ventricle and the basal cisterns – this helps bypass the cerebral aqueduct that gets compressed by the pineal mass.

Surgical resection to enable complete resection can be accomplished with either a supracerebellar-infratentorial or transcallosal-transventricular approach.

Kaloshi et al argue that these tumors can exhibit aggressive unpredictable behavior and that surgical resection followed by radiotherapy should be first line treatment(2). However, there has been one report of full tumor regression after radiation therapy alone(1). These tumors have been shown to recur despite surgery and radiation therapy with a recurrence described eight months later(2).

Since 2007 the World Health Organization (WHO) provisionally classifies these tumor types as grade II/III. Once more PTPR cases have been identified and studied and a more precise grading for these tumors occurs, it may be possible to determine if surgery or radiation therapy is a better alternative for the Grade II tumors. In addition, surgery followed by radiation therapy could be confirmed as the preferred means of treating Grade III tumors.

The majority of the cases in the literature underwent surgical resection. The 5 year estimated survival is 73% and estimated progression- free survival is 27%(3). Extent of resection correlates with better overall survival and reduced risk of recurrence. Recurrence was generally detected during the follow up period and options of radiation, chemotherapy or repeat surgical resection were given in the previously reported cases.

In our case we discussed both options with the patient, but felt that tumor resection was appropriate and our patient was amenable to the risks associated with the supracerebellar-infratentorial approach. She is without tumor recurrence at 3 months and has completed radiation therapy to the tumor bed after total resection. We will continue to follow her routinely over the long term with serial imaging studies. Although there is no consensus on optimal treatment strategies we agree that surgical resection is a reasonable first line treatment option followed by radiation therapy. If there is recurrence consideration will be given to stereotactic radiosurgery or chemotherapy.